Welcome To Our Services & Therapies Page 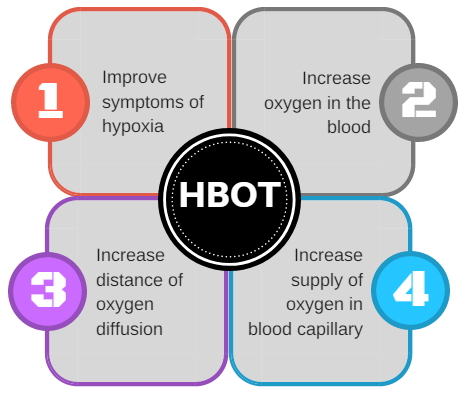 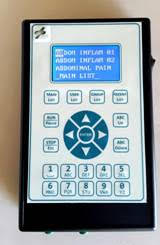 Rife machines are electronic devices that produce varying frequencies of energy (similar to a microwave, but at frequencies not harmful to the body). This energy penetrate the tissues of the body and cause the spiral-shaped Borrelia to resonate so much that the integrity of the bacteria is disrupted; weakening and even killing them. This is an effective means for killing borrelia and is supported by the production of herx reactions in Lyme patients after Rife treatments, while non-infected individuals don’t experience the herx reactions when exposed to Rife treatment.

Rife machines are named after Royal Raymond Rife, born in 1888 in Elkhorn, Nebraska. From the 1920’s through to his death in 1971 he lived and worked in San Diego, California. Rife real claim to fame came from two specific inventions (although he had many others). One was a super microscope allegedly capable of resolving objects below the Abbe limit, and with magnification claimed to be as high as 31,000 times. The second invention was an electromagnetic therapy device consisting of a light transmitter feeding a plasma tube (Tesla tube) which was claimed to kill specific pathogenic microorganisms at specific frequencies. It was claimed that in 1932 Rife succeeded in isolating a “filter-passing” microorganism (later referred to as the BX virus) that was a cause of cancer. And in 1934 it was further claimed that Rife succeeded in curing several cases of cancer in real patients by targeting this microorganism with his light frequency machine. The Rife technology was dismissed by the American Medical Association as quackery and was suppressed by various organizations and American federal agencies. This took place at the same time that the FDA and AMA went on their witch-hunt, driving many successful clinicians who were not using standard pharmaceutical agents to close their doors or move out of the country. Rife just quit and retreated, a broken man.

“Royal Raymond Rife was a man whose microscope, frequency instrument, and support of pleomorphism are still controversial today. With hopes of seeing where Mr. Rife’s house once stood, I drove over to the location but could find nothing but a sign that read, “Chatsworth Blvd.” I drove back and forth on Chatsworth Boulevard. There was no longer a 2500 Chatsworth Boulevard. There was nothing to indicate that, possibly, at this address, a “cure for cancer” was found by a man who began researching cancer in 1920 and, by 1932, had isolated the cancer “virus.” In 1934, he  opened a clinic that successfully cured 16 of 16 cases within 3 months. He developed an optical microscope that had a magnifying resolution that still surpasses any built today except for the electron microscope. He did not use fixed specimens. All of his observations were based on living specimens. He was able to isolate what he considered to be the cancer virus, which he injected into hundreds of laboratory mice that subsequently developed cancer. He found that the “cancer virus” could be destroyed by the use of electromagnetic radiation and proceeded to design an apparatus that did so (Lynes, 2001).” – 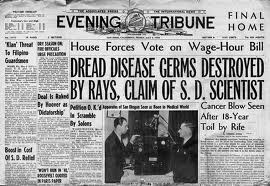 “Mr. Rife’s discoveries, in my opinion, were buried by others’ professional jealousy, greed, and ignorance. He was too far ahead of his time. Because many scientists did not understand what he developed, they did their best to ignore it.” – Barry Lyons, author of The Cancer Cure That Worked.

Rife believed that different species of life have their own electromagnetic “signature” – a pattern of oscillation based on its individual genetic chemical blueprint.  His theories have been confirmed by quantum physics though modern medicine ignores the healing abilities connected to tapping those frequencies. Rife discovered that viruses, bacteria, and parasites are particularly sensitive to their own specific “bio frequencies” and could be destroyed by intensifying those frequencies until they literally explode… like an intense musical note that can shatter a wine glass! While cell walls of single-celled organisms tend to be less stable and lyse when bombarded with their own or similar frequencies, hitting human body cells with their own frequencies does nothing but help. In order to “explode” the microbes, Rife invented a “frequency beam ray” machine, similar to what we now call a Rife Machine.

As Christopher Bird reported regarding bacterium/viruses, “…many lethal (disease) those of tuberculosis, typhoid, leprosy . . . appeared to disintegrate or ‘bIow- up’ in the field of his microscope.”

A true “Rife machine”, of course, is one made by Royal Rife himself. All others must be considered copycat devices, simply based on his theories but the essential understand of the Quantum Physics Rife employed is important. Rife used LIGHT frequency, so any machine NOT employing light frequency (many are electrical or sound frequency devices), though they may be beneficial, I don’t consider them real Rife machines. Most of these devices are referred to as a “frequency generator” and need to legally be called experimental in nature.

One of the theories on how a Rife machine works is the principle of ‘sympathetic resonance’, which states that if there are two similar objects and one of them is vibrating, the other will begin to vibrate as well, even if they are not touching. Basically, if you can mimic the quantum frequency of a cell or an atom, you cause it to vibrate. This will work with sound waves as well and may best be demonstrated when an opera singer hits the frequency of crystal, causing a glass to shatter. Have the atoms in the crystal changed in any way? NO, they just vibrated and were unable to remain in their current shape. The STATE of atomic structure was unaltered; the EFFECT on the atomic structure was simply mechanical. In the same way that a sound wave can induce resonance in a crystal glass and ultra-sound can be used to break up kidney stones, a Rife machine uses sympathetic resonance to physically vibrate offending cancer cells, bacteria, viruses and parasites (and YES, CLD spirochetes) resulting in their destruction and elimination from the body by causing them to virate and stimulating an immune response against them.

Another theory of illness and disease and one that may explain why Rife technology is so successful, states that since every cell of the body, from a quantum physics perspective, resonates at specific frequencies, CLD spirochetes (as well as any other pathogen) causes a dis-resonance and sets up what could be called, “low-energy” conditions in the body. Perhaps the frequency energy absorbed from a Rife machine may simply be sufficient to re-energize the body’s healing capabilities, or better stated, the Rife machine, used at frequencies of specific organs or tissues, re-energizes or re-sets normal resonant frequencies and allows the body to heal itself

Is it safe?
YES.  Rife is non-invasive in the sense that the skin is not broken and there is no damage to normal, healthy tissues and cells etc.  The frequencies and voltages are purposely in the range that only are harmful to cancer cells, bacteria, viruses, parasites, etc., and not healthy tissue or bacteria. Rife is non-toxic (little or no side effects other than the standard kill-off effect, i.e. “Herxheimer reaction”, caused by any modality that destroys pathogens and necessitates the body having to clean up and detoxify the mess.  This is a well-known and documented effect of any treatment that actually works.  It has no ionizing radiation and so cannot cause damage to tissue, the immune system, DNA breakage, etc.)

Can I use it with other treatments?
YES.   Rife can be used synergistically with most other treatment protocols (including medicine) without the danger of harmful interactions as is the case with drug therapy.

What does Rife technology work to combat?
Rife is MOST effective in dealing with microbial-based diseases (bacteria, viruses, fungi, mold, and parasites) and your own cells (cancer). It is also very beneficial to re-set normal cell frequencies. This is why patients have used the True rife for everything from acne to hormone balance. We include over 900 pre-set programs that we and others have developed that aide patients with a wide variety of disorders and ailments.

How long before I see results?
Everyone is different!  I tell everyone that if you are looking for a “Get Healthy Quick” scheme, look somewhere else – because with Lyme and Cancer,  e-coli strap viruses ext. there isn’t one. Don’t believe anyone telling you otherwise! I believe that the MORE SPECIFIC one gets in the frequencies that will HELP YOU, the better the results we get. This is why we SCAN all our patients to develop their SPECIFIC PROGRAMS.

What is a herb?

According to The Concise Oxford Dictionary, ‘an herb is any plant where the leaves, seeds or flowers are used for medicine, flavour or scent.’ There are thousands we never see in supermarkets but could buy as plants in a garden centre or grow from seed to use at home.

God’s Pharmacy – for every illness there is an herb or plant extracts that can cure.

Get our FREE brochure

HERBS AND THEIR USES 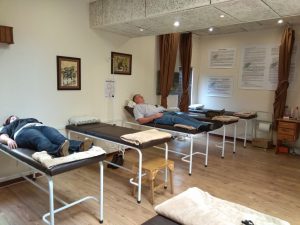 Ozone disrupts the integrity of the bacterial cell envelope through oxidation of the phospholipids and lipoproteins. In fungi, ozone inhibits cellular growth at certain critical stages. With viruses, the ozone damages the lipid envelope and interrupts the reproductive cycle by disrupting the virus-to-cell contact with per oxidation.

In circulatory disease, a clumping of red blood cells hinders blood flow through the small capillaries and decreases Oxygen absorption due to reduced surface area. Ozone reduces or eliminates clumping and red cell flexibility is restored, along with Oxygen carrying ability. Oxygenation of the tissues increases as the arterial partial pressure increases and viscosity decreases. Ozone also oxidizes the plaque in arteries, unclogging the blood vessels.

Ozone causes an increase in the red blood cell glycolysis rate, stimulating (2,3-DPG) which leads to an increase in the amount of Oxygen released to the tissues. There is a stimulation of the enzymes, which act as free radical scavengers and cell wall protectors: glutathione peroxides, catalyse, and superoxide dismutase. Ozone activates the Krebs cycle by enhancing oxidative carboxylation of pyruvate, stimulating production of ATP.

We are not medical doctors therefore we cannot give medical advice. The information presented herein is not presented with the intention of diagnosing or treating any disease or condition. This information is for educational purposes only. No responsibility is assumed by the author nor anyone connected with this website for the use of this information and no guarantees of any kind are made for the performance or effectiveness of the recommendations provided. The statements regarding our products have not been evaluated by the Food and Drug Administration. These products are not intended to diagnose, treat, cure or prevent any disease.

Scroll back to top